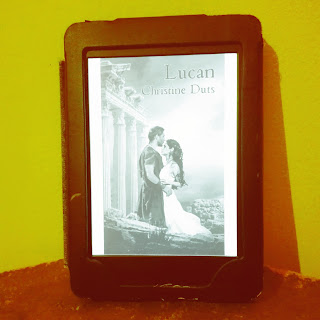 Blurb:
Reclusive Lucan now tells it all. There are no more secrets; and his past is no longer shrouded in mystery. We are introduced to his wife, Althea, and his beloved sister, Claudia. The tragedies that plagued him in mortal life are now out in the open, unleashed from his cross of burden.
Lucan´s story takes us to ancient Rome and introduces us to Commodus, the emperor of Rome. On the run from Commodus´s wrath, circumstances separate him from his family and he is caught by Penelope, fount of the vampires, who turns him into an immortal. Lucan has only his family and their safety on his mind, but he understands that to keep his family safe from the dangers of immortality, he has to leave them.
His journey takes him and Althea to Morgan, the banshee, who lives among the mysterious Forest People, and to his first encounter with a werewolf. Lucan and Althea take the reader on a voyage through the centuries, witnessing heroic battles in the East and the intrigues of monarchies in the West. The Renaissance brings Lucan and Althea together as a couple and re-introduces Giada, a dangerous Renaissance vampire. He finds friendship with the charismatic Orion who unwittingly brings him closer to the true fount of blood drinkers and lycans (vampires and werewolves) It is a tale interwoven in human history, a tale of love and persistence, hardship and hope, family and allies, and a desperate attempt to cling to the last remnants of humanity in a world of monsters, mortal or immortal.

About the Author:
I was born in Germany, my father being an officer in the Belgian Armed Forces stationed in Germany. I grew up in the Belgian military community, and later went to London and then Los Cabos, Mexico, where I eventually settled. I have been writing since the age of six, and I still have the very first story I ever wrote, packed in a tattered suitcase. Unfortunately I have lost the key, and I will have to cut it open to get that story.
I often find inspirations while walking on the beach, sitting on the sand and staring at the waves, or riding my motorcycle; and dreams can inspire me too. Anything can inspire me! :-) My goal is to live off my writing, because it is who I am; if I do not write, I feel like a part of me is being neglected, and I get frustrated and depressed.
I also run a small dog and cat shelter and I am currently working on building an animal sanctuary on my land.

My Take on the Book:
Even though this was a normal length novel; it seems as if I flew through it. I found the banshees weirdly intriguing, but at the same time - totally creepy. I ended up giving this book a three star rating and got a copy in exchange for an honest review.

Last Word:
I was surprised to find that there wasn't quite a cliffhanger to the end of this book like I was expecting - even though there are loose ends that need to be tied up in a sequel.