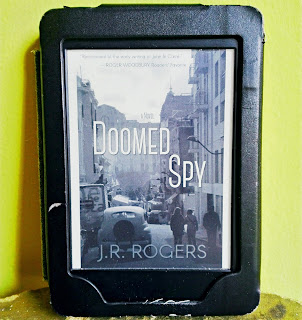 Blurb:
A psychological spy thriller set in 1960 in the quiet South American capital of Montevideo, Uruguay an unconventional distant posting at the height of the Cold War. The city is at first glance an unassuming battleground: the Rio de la Plata lapping at its shores, cobblestone streets lined with narrow buildings decorated with filigree ironwork, and overall a distinct colonial feel, but also with a palpable old European influence. At the center of the intrigue are two Cold War intelligence officers, a British MI6 officer, and the Soviet KGB Rezident. Both are seasoned operatives in the shadowy clandestine world of spies. Outwardly, the two are enemies but the Britisher is not what he seems. He has close secret ties to the Rezident who recruited him years ago in Belgium as a double agent. The intricate chilling details of the eventual betrayal of the MI6 officer as his life and work suddenly unravel ends climactically in faraway Moscow.

About the Author:
J.R. Rogers is a novelist of historical thrillers, foreign intrigue and espionage (Escritor de ficcion historica, espionaje e intriga) set in places not often explored. He has written six novels and also a collection of short stories. A number of his stories have been published in various literary and online publications. His forthcoming novel due in 2018 is a historical thriller of intrigue, subterfuge and destruction set amongst the turmoil of Italian colonialism in 1938 Asmara, Eritrea.
Besides writing fiction his interests include art, culture, indie film, photography and world travel.
He has lived in Europe and Africa and now lives in southern California.

My Take on the Book:
I enjoyed reading about the visual descriptions - there was sometimes quite a bit of scene setting, so if you're one of those readers that prefer a fast paced book this one might not be for you. I found Anastas Molotov quite a pleasant character, and found Nigel Strathmore slightly intriguing. There was your share of flawed characters - it was a bit frightening that Boris Gromov is willing to sell Anastas out to save his own hide. I'm also of the opinion that if Edgar Davies and Oleg Nadiensky had met under normal circumstances, they would have become great friends - though I wasn't a fan of Oleg's work persona and didn't agree with Edgar's lifestyle choices; and even though Harriet seemed like a pleasant character; had her nobleness and standards at the beginning - I didn't like the fact that she allowed her standards to drop. Even though I wasn't a huge fan of the ending, I can understand why it ended the way it did. I ended up giving this great book a four star rating.

Last Word:
This is the first novel that I've read from this particular author - and I really enjoyed it!