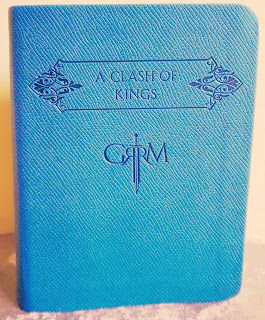 Blurb:
A comet the color of blood and flame cuts across the sky. And from the ancient citadel of Dragonstone to the forbidding shores of Winterfell, chaos reigns. Six factions struggle for control of a divided land and the Iron Throne of the Seven Kingdoms, preparing to stake their claims through tempest, turmoil, and war. It is a tale in which brother plots against brother and the dead rise to walk in the night. Here a princess masquerades as an orphan boy; a knight of the mind prepares a poison for a treacherous sorceress; and wild men descend from the Mountains of the Moon to ravage the countryside. Against a backdrop of incest and fratricide, alchemy and murder, victory may go to the men and women possessed of the coldest steel...and the coldest hearts. For when kings clash, the whole land trembles.

About the Author:
George R.R. Martin sold his first story in 1971 and has been writing professionally since then. He spent ten years in Hollywood as a writer-producer, working on The Twilight Zone, Beauty and the Beast, and various feature films and television pilots that were never made. In the mid ‘90s he returned to prose, his first love, and began work on his epic fantasy series, A Song of Ice and Fire. He has been in the Seven Kingdoms ever since. Whenever he’s allowed to leave, he returns to Santa Fe, New Mexico, where he lives with the lovely Parris, and two cats named Augustus and Caligula, who think they run the place.
The Editorial Alvi Books dedicated him, as a tribute and recognition, this space in Amazon in 2015.

My Take on the Book:
I wasn't sure if I liked Theon Greyjoy - he seemed a bit underhanded; and even though he had granted mercy in some ways, I think a lot of guilt still ate at him. Cersei Lannister (Baratheon) appeared to at times have a wisdom about her brought on by bad experiences; but, as always; there are characters that appealed to me: Littlefinger and Varys are obvious ones, but there's a new surprise here: Tyrion Lannister. He seemed to have this underhanded cunning and observant way to him as well as a slight intellectual side as well - he did a lot of silent observing and makes decisions based on what he sees.
There were some scenes that I thoroughly enjoyed as well: The conversations between Tyrion, Little Finger and Varys; I enjoyed the way the scene of the public against the royals as well as the fire scene played out - and lastly - there were times where certain aspects of this book really started to get interesting. Renly Baratheon seemed to be one of those happy-go-lucky people. I ended up giving this leisurely read a four star rating.

Last word:
There were still some loose ends by the end of this book - and I'm not sure when I'm going to get to the next one in the series; but I'm definitely interested to know how this is going to carry on.