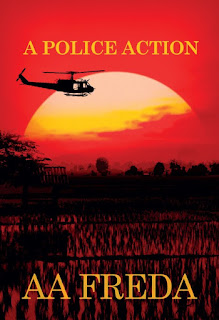 Year Published: 2017
Genre: Military with a hint of romance

Blurb:
A Police Action is a gripping coming-of-age Vietnam War-era romantic novel. It is the story of two lost and confused young adults. It is love at first sight when nineteen-year-old Samantha Powers meets James Coppi at the Country Honky Tonk in Colorado Springs. There are just two problems to a storybook ending for Samantha's passion. She is pregnant with someone else's child and James, a young solider, is heading for a war in Vietnam.
Will this instant attraction be enough to form a lasting bond? What will happen after James is deployed? Will he return home safely, and, if so, will it be to Samantha? Follow along as the young lovers mature through their individual hardships and those that they share.

About the Author:
A. A. Freda is an award winning author who writes about life experiences he's had or people he's met along the way.
His first novel, Goodbye Rudy Kazoody. A coming of age work about a group of teenagers growing up in a New York City neighborhood during the early 1960's was acclaimed by the critics.
His second piece A Police Action is another coming of age story about two confused young adults caught up during the free love and Vietnam era of the late 1960's.
​Freda grew up in New York City and now resides in Easton, CT, a suburb of New York City that offers him a tranquil environment that allows him to keep his finger on the pulse of the city he loves so much. A graduate of Bernard Baruch College at the City University in New York, he has served as an adjunct professor at the Fashion Institute of Technology in NYC. Freda also served in Vietnam the subject matter of A Police Action. In addition to writing, in his spare time, Freda enjoys fishing, hiking, climbing and shooting pool.

My Take on the Book:
I could identify with James Coppi's excitement about going home after being in the army, and there were times where he was encouraging. Sometimes it was sad hearing about the deaths that took place. I ended up giving this book a four star rating and got a copy in exchange for an honest review.

Last Word:
This book was a relatively quick read; though there were times when I couldn't quite keep up with some of the minor characters that made appearances throughout the book.