Review - Meet Me at 10 by Vicky Jones and Claire Hackney 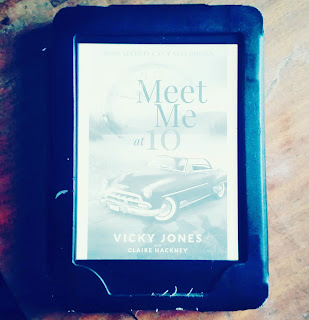 Blurb:
It’s 1958 and Shona Jackson, a twenty-something tomboy, is on the run from the neighborhood in Louisiana where her dark secret has been exposed.
Arriving in Alabama, Shona convinces the kind Jeffrey Ellis, wealthy co-owner of Ellis and Bruce Machinery, to give her a job and heads to the site with hopes of becoming invisible while she saves up the money to continue her journey to safety. There, she strikes up a bond with Cuban, who is on a similar path to her, but is racially abused on a daily basis by the workforce and by Jeffrey Ellis’s brutal business partner, Larry Bruce. Shona also meets Elbie, the elderly tool room supervisor, who has been covertly keeping a diary of all the horrific acts that have been carried out over the last five years by Bruce and his associates.
As Elbie helps Shona and Cuban settle into their jobs, they are introduced to Chloe Bruce, Larry’s daughter, resulting in their complex worlds becoming inextricably linked, with devastating consequences for all those involved.
Will Elbie’s diary end up in the wrong hands?
Will Cuban achieve his dream of making it to New York?
Will Shona’s past finally catch up with her?
A compelling and heart-breaking story of secrets too dangerous to confess to, at a time of cruel, unforgiving and relentless intolerance to difference.

About the Author(s):
Claire Hackney is a former English Literature, Drama and Media Studies Teacher who, after attending a local writing group with Vicky and writing several of her own short stories, has now decided to focus her career on full-time novel writing. She is an avid historian and has thoroughly enjoyed researching different aspects of the 1950s for the creative language re-write of this novel. Claire is very much looking forward to the many future writing projects she has in the pipeline, including several ideas for children’s book.

Vicky Jones was born in Essex. She is an author and singer-songwriter, with numerous examples of her work on iTunes and YouTube. At 20 years old she entered the Royal Navy and, after leaving, realised she was drifting through life. Feeling a loss of direction, she wrote a bucket list of 300 things to achieve before she was 40, an adventure which took her travelling, helped her to face her fears and encouraged her to go after her dreams. At the time of printing, she is now two-thirds of the way through her bucket list.
One thing on her bucket list was to write a song for a cause. An anti-bullying track called ‘House of Cards' is now on iTunes to download whereby 100% of proceeds go to charity.
Writing a novel was also on her bucket list and through a chance writing competition at her local writing group, the idea for ‘Meet Me At 10’ was born. Vicky hopes she can change hearts and minds with the gritty themes the book explores. She will also be donating 20% of the profits to charity.
Vicky is an avid traveller, stemming from her days spent exploring the world with the Royal Navy and has visited around 50 countries so far. She has also recently graduated from the Open University after studying part time for her degree in Psychology and Criminology - another bucket list tick! She is currently writing about her bucket list adventures alongside planning and writing more fiction novels and children’s books.
She now lives in Cheshire, splitting her time between there and visiting her family and friends back in Essex.

My Take on the Book:
In my opinion, there were too few nice male characters in this novel; since I ended up not liking most of them, in particular; Larry Bruce, Deputy Paul and Kyle Chambers; for how they treated people of a different racial and sexual orientation background, as well as how they treated women. The sudden but justified change in attitude made me a bit suspicious. I am SO happy that Larry Bruce got what was coming to him. I ended up giving this book a four star rating and got an ARC in exchange for an honest review.

Last Word:
Even though this was a normal length novel; I can't believe how I flew through it. I most certainly hope that this isn't the last novel from these particular authors; even though through a lot of the book I was cursing some of the unsavory characters.