Review - Ewan Pendle and the White Wraith by Shaun Hume 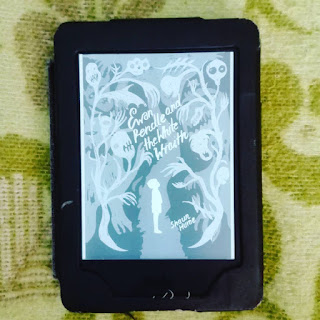 Blurb:
Ewan Pendle was weird. Really weird. At least, that's what everyone told him. Then again, being able to see monsters that no one else could wasn't exactly normal.
Thinking he has been moved off to live with his eleventh foster family, Ewan is instead told he is a Lenitnes, one of an ancient race of peoples who can alone see the real Creatures which inhabit the earth. He is taken in by Enola, the mysterious sword carrying Grand Master of Firedrake Lyceum, a labyrinth of halls and rooms in the middle of London where other children, just like Ewan, go to learn the ways of the Creatures.

About the Author:
The first story I ever wrote was entitled ‘The Stagecoach Robbery’. I was six. It was illustrated too, with colour drawings of the masked bandits with bags of loot in their hands in particular. I made it into a little book, complete with a green cardboard cover. I’m pretty sure my mother has it tucked away somewhere.
After that I remember watching ‘Alien’, directed by Ridley Scott, and then embarking on the writing of my own alien story. This was done entirely on an electric typewriter, for which I was given short permission to use, including thin and special (to me at the time!) typewriter paper. I put these stories in a blue folder and logged them away on a shelf … These would be some of the last stories I would write for many years.
After being a teenager was just about done with, I turned my hand at short stories and screenplays in grade eleven and twelve, as part of English, Creative Writing and Film Studies courses I was undertaking at school. I didn’t find that schooling did me any good in terms of writing, so I set out to live a little in the interim, with hopes that experience mixed with imagination might be a better teacher.
Thus ensued a move away from home, and travel and life and work in Europe. During the early days of this time I wrote little, but for one idea I had formed in my head before setting sail from the Southern Hemisphere. This idea involved many things, but paramount was a young boy, not too unlike me, who could see the monsters that there were in the world, but which no one else could see … Or so he thought.
Through this decade as an adventurer, I took on many jobs within the world of Education, teaching and fostering and mentoring and caring for children of all ages and in many different environments. When I wasn’t battling the little blighters, Ewan was duelling with monsters, and over a roughly ten year period, Ewan Pendle the book series was planned out, and Ewan Pendle and the White Wraith the book was written.
I wrote Ewan Pendle because I wanted the best of what inspired me within the books I love to live on, and I wanted to have a world like those to still be able to escape into when I wanted. The thought of anyone else reading this new story of mine, however, was not a first, second or even thirty-third thought. Ewan Pendle was for me. A world to live in which didn’t include the worry about paying the bills or getting a ‘real’ job. But sooner my thoughts also turned to what I could do with the story. And as I worked hard each day to make a difference in young people’s lives, I thought about what kind of difference Ewan might be able to make to their days also.

My Take on the Book:
I found this to be quite an interesting and enjoyable story. Some of the characters were quite fascinating. I thought it was really nice how Enid Ikin was finally became a part of Ewan Pendle's group of friends. I gave this book a four star rating and got a copy in exchange for an honest review.

Last Word:
I hope that this book is part of a series.