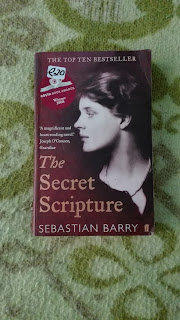 Blurb:
Sebastian Barry's novels have been hugely admired by readers and critics, and in 2005 his novel A Long Long Way was shortlisted for the Man Booker Prize. In The Secret Scripture, Barry revisits County Sligo, Ireland, the setting for his previous three books, to tell the unforgettable story of Roseanne McNulty. Once one of the most beguiling women in Sligo, she is now a resident of Roscommon Regional Mental Hospital and nearing her hundredth year. Set against an Ireland besieged by conflict, The Secret Scripture is an engrossing tale of one woman's life, and a vivid reminder of the stranglehold that the Catholic church had on individuals throughout much of the twentieth century. The Secret Scripture is soon to be a film starring Rooney Mara and Vanessa Redgrave.

About the Author:
Sebastian Barry was born in Dublin in 1955. His play, The Steward of Christendom, first produced in 1995, won many awards and has been seen around the world. His novel, The Whereabouts of Eneas McNulty, appeared in 1998. He lives in Wicklow with his wife and three children.

Connect with the Author:
* There appears to be no social media or website for this author.

My Take on the Book:
This book started slow at first. I didn't like that things were vague at times in this novel, especially with the setting and circumstances that were surrounding Roseanne McNulty; if the environment around her had been described better, I would have understood her a little bit better, this was also the same with her mother. I ended up giving this book a three star rating.

Last Word:
This book was quite character driven, but it would have helped if the environment had been described more.