Review - The Lucky One by Nicholas Sparks 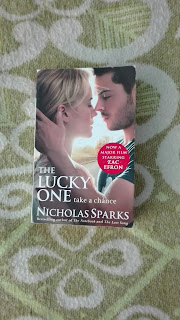 Blurb:
Do you believe in lucky charms?
While in Iraq, U.S. Marine Logan Thibault finds a photo, half-buried in the dirt, of a woman. He carries it in his pocket, and from then on his luck begins to change.
Back home, Logan is haunted by thoughts of war. Over time, he becomes convinced that the woman in the photo holds the key to his destiny. So he finds the vulnerable and loving Beth and a passionate romance begins.
But Logan battles with the one secret he has kept from Beth: how he found her in the first place. And it is a secret that could utterly destroy everything they love . . .

About the Author:
Nicholas Sparks is one of the world’s most beloved storytellers. All of his books have been New York Times bestsellers, with over 105 million copies sold worldwide, in more than 50 languages, including over 75 million copies in the United States alone.
Sparks lives in North Carolina. He contributes to a variety of local and national charities, and is a major contributor to the Creative Writing Program (MFA) at the University of Notre Dame, where he provides scholarships, internships, and a fellowship annually. He co-founded The Epiphany School in New Bern, North Carolina in 2006. As a former full scholarship athlete (he still holds a track and field record at the University of Notre Dame) he also spent four years coaching track and field athletes at the local public high school. In 2009, the team he coached at New Bern High School set a World Junior Indoor Record in the 4 x400 meter, in New York. The record still stands. Click to watch the Runner’s World video with Nicholas.

My Take on the Book:
I enjoyed the story-line of this book; though I wasn't a fan of Keith Clayton. I gave this leisurely read a four star rating.

Last Word:
I definitely plan on watching the movie at some stage as well.