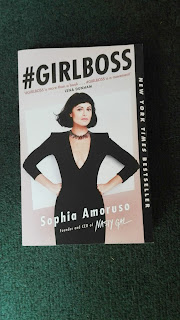 Blurb:
In this New York Times bestselling sensation, founder and Executive Chairman of Nasty Gal Sophia Amoruso shares her story and inspires women everywhere to join the #GIRLBOSS movement.
In the space of ten years, Sophia Amoruso has gone from high-school dropout to founder and Executive Chairman of Nasty Gal, one of the fastest-growing retailers in the world.
Sophia's never been a typical executive, or a typical anything, and she's written #GIRLBOSS for other girls like her: outsiders (and insiders) seeking a unique path to success.
Filled with brazen wake-up calls, cunning and frank observations, and behind-the-scenes stories from Nasty Gal's meteoric rise, #GIRLBOSS covers a lot of ground. It proves that success doesn't come from where you went to college or how popular you were in school. Success is about trusting your instincts and following your gut, knowing which rules to follow and which to break.
Inspiring, motivating and empowering, #GIRLBOSS will give you the kick up the ass you need to reach your potential.

About the Author:
As founder and executive chairman of Nasty Gal, Sophia Amoruso is the creative visionary, modern-day entrepreneur and fashion doyenne who has forged an unprecedented path in building a brand. Named by Forbes as “Fashion’s New Phenom” as well as being featured on the cover of their June 2016 SELF MADE WOMEN issue, Amoruso has become one of the most prominent figures in retail and a cultural icon.
Amoruso released the paperback edition of her New York Times 18-week best-seller #GIRLBOSS on September 29th, 2015. Originally released in hardcover under the Portfolio and Putnam imprints of Penguin Random House, #GIRLBOSS is part memoir and part business book with an edge. Offering insights on entrepreneurship and career advice, #GIRLBOSS is a sassy and irreverent look into how Amoruso organically grew her business from the ground up.

My Take on the Book:
This book is for those who are bold enough to step out on their own, and even for those that haven't got that boldness. I enjoyed this leisurely read from start to finish and gave it a four star rating.

Last Word:
Since I've read this book, I've stumbled upon one or two ideas of my own, and am hoping to implement them soon!