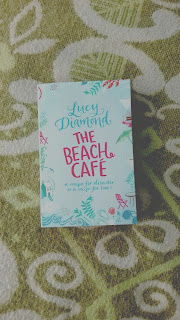 Blurb:
Evie Flynn has always been the black sheep of her family - a dreamer and a drifter, unlike her over-achieving elder sisters. She's tried making a name for herself as an actress, a photographer and a singer, but nothing has ever worked out. Now she's stuck in temp hell, with a sensible, pension-planning boyfriend. Somehow life seems to be passing her by.
Then her beloved aunt Jo dies suddenly in a car crash, leaving Evie an unusual legacy - her precious beach cafe in Cornwall.
Determined to make a success of something for the first time in her life, Evie heads off to Cornwall to get the cafe and her life back on track - and gets more than she bargained for, both in work and in love...

About the Author:
First of all, a confession. My name isn’t really Lucy Diamond at all, it’s Sue Mongredien. I’ve used a pen name because ‘Diamond’ is a lot easier to spell and pronounce than ‘Mongredien’ and also because I’ve written lots of children’s books too and wanted to keep the genres separate. (There is actually another Lucy Diamond on Amazon who writes religious children’s books. That isn’t me, though.) I was born in 1970 and grew up in Nottingham. I read English at Leeds University then moved to London and worked for various publishers before I packed it all in to go travelling around the world for a year and a half. When I came back to the UK, I worked in publishing again, then moved to the BBC.
I now live in Bath with my husband and three young children and divide my time between writing and looking after them.

My Take on the Book:
I really ended up liking this story-line as well as some of the minor characters. I ended up giving this leisurely read a four star rating.

Last Word:
Since this is the first book that I've read by this author, I most certainly wouldn't mind picking up another one of her books.