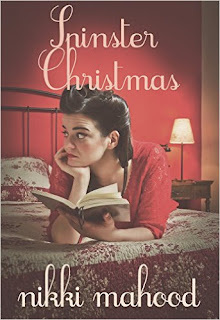 Blurb:
Spinster Christmas was originally included in the 2013 Charity Anthology 'Merry Chick Lit' and is now available as the first part in a Novella series.

Cara's looking forward to spending Christmas alone until she learns her old--and she believes very gay--crush needs a place to stay. Though it soon becomes clear that while still hot, Ronan isn't gay after all...

About the Author:
Nikki Mahood was born in Dublin and grew up in North Yorkshire. Her grandmother, still back in Ireland, provided her with stationary so they could write to each other regularly. That, along with an overactive imagination, nurtured by a love of reading and obsession with Josephine March of Little Women, was the start of her writing career. Without setting out to write a book, a taster course for The Open University brought Fallon Magee into Nikki's imagination, followed shortly by Abner Hagarth-Smythe, and suddenly what had started as a character exercise became her novel, Fallen.

My Take on the Book:
This was a nice light chick lit novella. I loved the writing style of this book and it's nice how the narrator, Cara Smith, has got so much detail to share about her life; I also found her humorous. I ended up giving this ebook a 4 star rating.

Last Word:
I definitely can't wait to read the next one in the series!