Review - The Diviners by Libba Bray 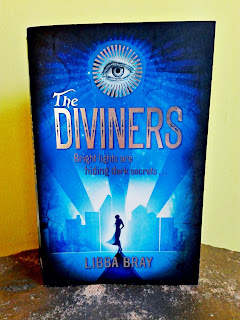 Blurb:
It's 1920s New York City. It's flappers and Follies, jazz and gin. It's after the war but before the depression. And for certain group of bright young things it's the opportunity to party like never before.
For Evie O'Neill, it's escape. She's never fit in in small town Ohio and when she causes yet another scandal, she's shipped off to stay with an uncle in the big city. But far from being exile, this is exactly what she's always wanted: the chance to show how thoroughly modern and incredibly daring she can be.
But New York City isn't about just jazz babies and follies girls. It has a darker side. Young women are being murdered across the city. And these aren't crimes of passion. They're gruesome. They're planned. They bear a strange resemblance to an obscure group of tarot cards. And the New York City police can't solve them alone.
Evie wasn't just escaping the stifling life of Ohio, she was running from the knowledge of what she could do. She has a secret. A mysterious power that could help catch the killer - if he doesn't catch her first.

About the Author:
Libba Bray is the New York Times bestselling author of The Gemma Doyle trilogy (A Great and Terrible Beauty, Rebel Angels, The Sweet Far Thing); the Michael L. Printz Award-winning Going Bovine; Beauty Queens, an L.A. Times Book Prize finalist; and The Diviners series. She is originally from Texas but makes her home in Brooklyn, NY, with her husband, son, and two sociopathic cats.  You can find her at…oh, wait. You already did. Nevermind—you are a genius!

My Take on the Book:
This was a nice start to the series, the story-line was intriguing; and there were times when it seemed quite creepy. I ended up giving this book a four star rating.

Last Word:
I'll definitely be reading the second book in the series to see how this story carries on.