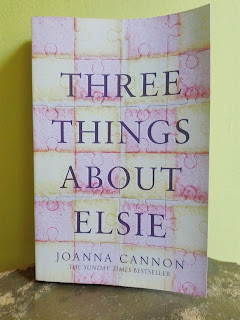 Blurb:
84-year-old Florence has fallen in her flat at Cherry Tree Home for the Elderly. As she waits to be rescued, she considers the charming new resident who looks exactly like a man she once knew – a man who died sixty years ago. His arrival has stirred distant memories she and Elsie thought they’d laid to rest. Lying prone in the front room, Florence wonders if a terrible secret from her past is about to come to light …

About the Author:
Joanna Cannon is the author of the Sunday Times bestselling debut novel The Trouble with Goats and Sheep, which has sold over 250,000 copies in the UK alone and has been published in 15 countries. The novel was longlisted for the Desmond Elliott Prize, shortlisted for The Bookseller Industry Awards 2017 and won the 2016 BAMB Reader Award. Joanna has been interviewed in The Guardian, The Observer, The Sunday Times, The Times and Good Housekeeping magazine, and her writing has appeared in the Sunday Telegraph, Daily Mail and the Guardian, amongst others. She has appeared on BBC Breakfast, BBC News Channel’s Meet the Author, interviewed on BBC Radio 4 and BBC Radio 5, and is a regular at literary festivals across the country including Edinburgh and Cheltenham. Joanna left school at fifteen with one O-level and worked her way through many different jobs – barmaid, kennel maid, pizza delivery expert – before returning to school in her thirties and qualifying as a doctor. Her work as a psychiatrist and interest in people on the fringes of society continue to inspire her writing, and Joanna currently volunteers for Arts for Health, an organisation bringing creative arts to NHS staff and patients.  Joanna Cannon’s second novel Three Things About Elsie is published in January 2018 and explores memory, friendship and old age. She lives in the Peak District with her family and her dog.

My Take on the Book:
There were times when this book was a bit of a mind turner - especially towards the end of the novel. Simon seemed to be one of those people that are very habitual - that has got a very set routine. At times Gabriel Price could be quite sinister, but he eventually got what was coming to him. I gave this leisurely book a four star rating.

Last Word:
It's the first time that I've read a novel by this author, and I am likely to read more books from her in the future.