Review - Valentine: Act I of II by Elliott Morreau 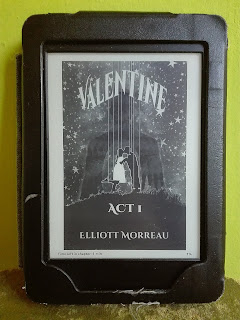 Blurb:
Welcome to Coalfields.
A Town where everyone fits in. From murderers to rapists to pedophiles. And you. Yes, you.
What? You think you’re so much different from them? That’s what Jack and Lia thought too. After all, what do two high school lovebirds have in common with a place like that?
Nothing.
Until one of them commits murder. But even then, who am I to Judge? After all, I'm merely an observer in the stars—a spectator. God.
So out of all the people in the world, why observe the life of two teenagers? Because it's simple: They're special.
One is the greatest high school quarterback in North America who's slept with as many girls as the hairs on his head. The other? A child-like teenager who was abused by her now-dead father.
But it wasn't the murder of Lia's father, or the fact that Jack had fallen head over heals for a virgin, that interested me.
It was because of the fateful day that Lia looked me dead in the eyes. A mere mortal, looked upon me, God. It was then, for the first time I felt fear. In the reflection of her eyes—the dark figure. A manifestation. An It.
Something I hadn't created.
And with his cherry red lips, It smiled back.
(This is the first part of a two-part story that will conclude in Valentine: Act II)


I don't take things very personally, and if you're offended with any of my work, I understand. You're not the first.
I don't take life too seriously, often times I go to work, hit the gym, write, and drink. A lot.
I'm Canadian.

My Take on the Book:
Both Lia Landon and Jack Manual deal with the past differently - and both weren't very likable characters, you realise that they have a lot to work through and a lot of growing up to do as well. I wasn't a huge fan of the offer that Pan and Joe made to Lia and Jack. I was also to some extent rooting for Rich and Claudia with their police case. It was interesting listening to Lia explain her story to the group of women near the end of the book. One thing I did love about this book was the writing style. I ended up giving this book a four star rating and got a copy in exchange for an honest review.

Last Word:
Even though I wasn't a huge fan of the main characters, I'm definitely interested in finding out what happens to them in the second book.