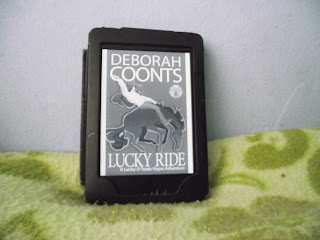 Blurb:
Everyone Has a Hidden Talent For Lucky O’Toole it’s murder…solving it. Surviving in Sin City takes cunning, a pair of five-inch heel, and a wiseass attitude. Lucky has mastered them all and has a pair of legs she uses to kick butt and turn heads. As the Chief Problem Solver for the Babylon, Las Vegas’s most over-the-top destination, mischief is in her job description. She’s good at her job. She’s less good at life. But who has time for a life when there’s a killer on the loose? And who would want to kill a clown? Lucky isn’t in any mood to find out. For one, it’s New Year’s Day and Lucky’s birthday. And she hasn’t caught her breath after a chase to the death in Hong Kong and Macau. Her French chef is pushing to set the wedding date…and introduce her to his mother. Her former lover, Teddie, wounded in the China chase, needs TLC. As if this wasn’t enough. A young woman, in town with the rodeo, shows up at Lucky’s office with a secret that could blow the lid off her life as she knows it.

About the Author:
Deborah Coonts swears she was switched at birth. Coming from a family of homebodies, Deborah is the odd women out, happiest with a passport, a high-limit credit card, her computer, and changing scenery outside her window. Goaded by an insatiable curiosity, she flies airplanes, rides motorcycles, travels the world, and pretends to be more of a badass than she probably is. Deborah is the author of the Lucky O’Toole Vegas Adventure series, a romantic mystery romp through Sin City. Her contemporary romance inclinations found wing in The Heart of Napa series, set amid the bucolic vineyards of Napa. For thrills and dark mystery, she penned, After Me, an iBooks Best Of and a Nook First choice. And to further flex her writing abilities, Deborah penned the Sam Donovan series, a romance suspense series highlighting her love of flight. Right now, Deborah calls San Francisco home, but, since it’s her we’re talking about, this too can change.

My Take on the Book:
I find Lucky O'Toole's relationship with her parents quite fascinating. This novel had quite a decent pace to it; one of the best I've come across if not the best. The information is given in small amounts, which I really appreciated, so none of it overwhelmed me. Overall, I found the book really enjoyable and ended up giving it a four star rating and got a copy in exchange for an honest review.

Last Word:
One thing I want to mention is that the potential book boyfriends in this novel was absolutely awesome. I had a little bit of a hard time choosing who I really liked overall, but I think Lucky's boyfriend, Jean-Charles Bouclet, is going to be the winner here. Other guys in this novel that I really liked were Squash Trenton and Detective Romeo. It's the first time I'm reading a book from the Lucky O'Toole series, and this one definitely doesn't disappoint, and I will most certainly be reading more of this series in the future.