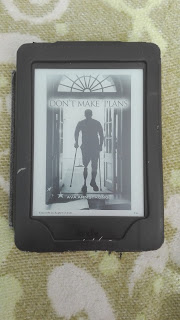 Blurb:
Kent McCabe, a U.S. Marine, returns from Iraq a changed man and makes a valiant effort to put his life back together. However, navigating life without a home, a job, or friends becomes his toughest mission. As he continues to fight demons, he moves in with his grandfather – a World War II veteran – who lives in Maine. His grandfather’s old farmhouse is a familiar place. It’s where he spent many childhood summers. Upon arrival, Kent meets a neighbor, Paige Hathaway, and her young son. Paige is fighting a war of her own.
A love story, “Don’t Make Plans” is also a tale of resilience and hope. An introspective romance that involves facing fears and insecurities that live inside the human mind.

About the Author:
Ava describes herself as a Constitutional Conservative, and sleeps with a loaded Smith and Wesson revolver. She has one child, whom she loves, and her collection of firearms, which she loves slightly less, and a special affinity for Glocks and tactical shotguns. Her favorite things are the smell of molten metal at the shooting range, motor oil that drips from vintage 1940's Indian motorcycles, and the scent of sandalwood soap. You'd have to read her novels to understand that more deeply.

My Take on the Book:
I was in two minds about this book. There were things that I liked and things that I thought could be improved on. One of the things like I liked was that Sasha was still there at the end of the book, though it didn't give a time frame, so I wasn't sure how soon it was after Sasha had the conversation with Paige Hathaway. I also felt that there could have been a little bit of a lead up to the wedding that was at the end of the book. There were also times when the sentences appeared abrupt. Overall, the story idea was nice, and I ended up giving this book two and a half stars out of five. I got a copy in exchange for an honest review.

Last Word:
This is the first novel that I've read by this author, and it seemed like a bit of a quick read at times. I want to read another book by this author though, since there were things that bothered me in this book.