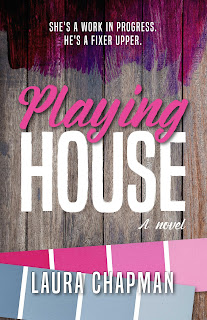 Blurb:
She's a work in progress . . .
Bailey Meredith has had it. As an assistant at a prestigious interior design firm, she’s tired of making coffee and filing invoices. She’ll do just about anything to get out from under the paperwork and into the field for real experience. Then she sees an ad for a job that seems too good to be true.
He's a fixer upper . . .
Wilder Aldrich knew she would be perfect for the crew the moment he saw her. His hit home improvement show only hired the best, and Bailey had potential written all over her. It isn’t just her imaginative creativity and unmatched work ethic that grabs his attention. There’s just something about her.
With chemistry on screen, it’s only a matter of time before sparks fly behind the scenes as well. But with Bailey’s jaded views on romance and a big secret that could destroy Wilder and everyone he cares about are either of them willing to risk it all for love?

About the Author:
Laura Chapman is the author of First & Goal, Going for Two, Three & Out, The Marrying Type, and Playing House. A native Nebraskan, she loves football, Netflix marathons, and her cats, Jane and Bingley. She loves talking to readers. You can connect with her on Facebook, Twitter, and Instagram. You can also get the latest news from her website, blog, and monthly newsletter (All these links are down below).

My Take on the Book:
I thought that the setting and the content of this book was pleasantly different. I also would have liked to know what had happened after the book finished. I gave this book a five star rating and got an ARC ebook in exchange for an honest review.

Last Word:
It was so nice to be reading one of Laura Chapman's books again. Out of all the ones I've read; this one is probably my second favorite; after 'Hard Hats and Doormats'. 'Three & Out' has now been relegated to third place after I've read this book (it was previously in second place). I get the feeling that 'Hard Hats and Doormats' will always be my favourite, though a person never knows...