Review - On the Road by Richard Hammond 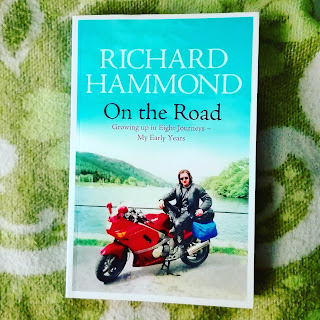 Blurb:
ON THE ROAD: GROWING UP IN EIGHT JOURNEYS - MY EARLY YEARS is a new form of autobiography, in which TOP GEAR presenter Richard Hammond tells the story of his early life through a series of significant driving episodes. He's a child in the back seat of Dad's car on the way to the seaside in Weston-Super-Mare. He's on his first bike, a red one, in Solihull, then on his first motorcycle, a Honda MTX50. He's at the wheel of his first car (and in the back with his first girlfriend). He is driving a furniture delivery van as part of his first job in and around Ripon. Now he is showing off with a friend, risking everything.
ON THE ROAD is an emotional road map in which each chapter has its own registration number, and its own distinctive interior. Most importantly, each chapter sets off and arrives. ON THE ROAD surges on to its destination, reversing or moving quickly through the gears, reliving the central episodes and conflicts of Richard's life. Every chapter is a stage in a longer journey. Although there are precious few road-rage monologues against four-wheel drivers and men in vests in white vans, Richard Hammond's readers will quickly recognise the funny self-deprecating and balanced ease that has made him one of Britain's best-loved writers and television presenters.

About the Author:
Richard Hammond is internationally famous for co-presenting TOP GEAR with Jeremy Clarkson and James May. He has produced and presented insightful documentaries for BBC One, examining the lives of two of his heroes, Sir Stirling Moss and Evel Knievel. He is the author of a number of bestselling books including ON THE EDGE, AS YOU DO, and IS IT JUST ME? In 2015, Richard, Jeremy, James and Andy Wilman began work on THE GRAND TOUR for Amazon Prime.
Richard is married to Mindy and has two daughters, Izzy and Willow. He shares his garage with a vast and ever-changing collection of motorcycles both vintage and current.

My Take on the Book:
The narration of this book is slightly different to what I was expecting, but a good, pleasant different; which kind of makes it obvious that I'm more used to the Top Gear Richard. He could sometimes be quite reflective with regards to his teenage years. This was a leisurely book that I quite enjoyed and ended up giving the book a four star rating.

Last Word:
Since this is the first book that I'm reading by this author and enjoyed it, I'll definitely be reading some more in the future.