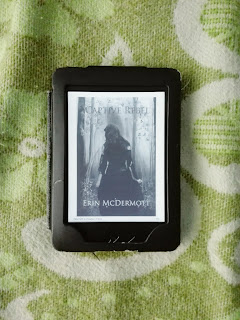 Blurb:
In a world where Greek Gods rule over the Allegiance, Marylyn O’Conner struggles to survive.
Marylyn is a rebel, forced to do the rebellion’s bidding until an unforgiving family debt is paid. A pawn in the war against the Allegiance, she is obligated to become a rebel spy, or her family will suffer.
When word spreads that an Allegiant Prince, Ariston, has escaped rebel captivity vowing to hunt down rebel spies, Marylyn realizes her only hope is to escape Allegiant territory.
While on the run, Ariston captures Marylyn, preventing her from any chance of returning home. Desperate, she knows she needs to escape her alluring captor or risk the safety of her family.
But Marylyn can’t keep herself from falling for the mysterious prince as she finds that he can empathize with her troublesome past - a past no ally has understood before.

About the Author:
Erin McDermott was born and raised in New Jersey. She graduated college with a bachelors degree in History. If she's not in her room writing, you may find somewhere on the Jersey Shore with her family. She has been writing stories since 3rd grade. It was not until after experiencing the fast-paced life New York City had to offer that she decided to finally take the plunge and finish her first book, CAPTIVE REBEL (The Allegiance, Book 1).
During her years in college she expressed a deep interest in Greek Mythology, which she incorporates into her current project, The Allegiance Series. She is incredibly grateful to her family for supporting her throughout the trials and tribulations of the independent publishing process.

My Take on the Book:
By the end of this book, Marylyn O' Connor has a foot in each world (the Rebels and the Allegiants). This book has a mixture of genre elements to it: Dystopian; post-apocalyptic; fantasy with an overall Young Adult genre theme. I ended up giving this book a four star rating and voluntarily reviewed a copy of the book.

Last Word:
Even though this was only a small start to the world that I was introduced to in the book; I'm interested to know more, so I will be reading more books in the future to see where the story goes.