Review - Forever Since an Apple by Ken Welsch 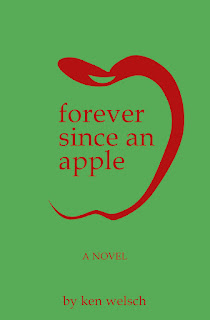 Blurb:
Reality TV stardom. Garage band dreams. Through the lens of his camera, news photographer Daniel Evart sees a world in which opportunities are evident and success is clearly defined. If only life was that simple.
Set on a fictional college campus in rural northwestern Michigan, "Forever Since An Apple" tells the story of how Daniel struggles with early-adulthood confusion and learns to define his own measure of success.

About the Author:
Ken Welsch has worked as a writer in Michigan since the early 1990s. As a news reporter, his work has been published in numerous publications, including the Detroit News, Bay City Times and News-Herald. He has also worked as a copywriter for ad agencies Team Detroit and the Detroit Media Partnership.
Born and raised in suburban Detroit, Ken studied creative writing and journalism at Central Michigan University in Mt. Pleasant, a campus and town that provided the inspiration for the fictional Great Lakes University and Wanishing in “Forever Since An Apple.”
He currently lives in Trenton, Michigan, with his wife and three children.

My Take on the Book:
There were times when Daniel Evart seemed to be a bit of a dreamer; and I found it interesting to follow him around when he did his journalism rounds. I was hoping for a little bit more from this story, with Daniel maybe being a bit more bold and outgoing, though I was satisfied with the ending, even though I wanted to know what happens afterwards.

Last Word:
I'm hoping that there's going to be a sequel to this book. The novella ended up being an easygoing and slightly fast read.