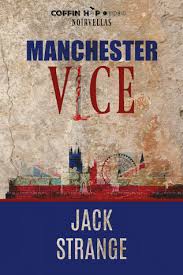 Year Published: 2017
Genre: Crime, with a touch of Thriller

Blurb:
Get ready for a taut, edge-of-your-seat thriller from best-selling UK author Jack Strange.
Brad Sharpe, a crime reporter for the Manchester Daily News, is tired of wasting his time on petty crimes and go-nowhere stories. Hungry for something bigger, and hoping to revive both his flagging career and his crumbling marriage, Brad connects himself to one of England's most notorious serial killers. This might just be Brad's biggest break, in more ways than one.

About the Author:
Jack Strange has had a very varied career.
He’s worked in a morgue, dug holes for a living, shifted heavy things on and off trucks, sold advertising space, and was, for a while, a Lawyer.
He’s always read voraciously and has wanted to be a novelist since the age of ten. He wrote his first novel aged fourteen (it wasn’t very good but he’s come on a bit since then).
Jack’s favourite modern authors include Russell H. Greenan, Amanda Robson, Jerzy Kosinski, Emma Curtis, Jim Thompson, and Simon Kernick (and a great many more – far too many to mention).
He enjoys parties and keeps himself fit. He is married with two adult daughters.

My Take on the Book:
I suspected what was going on with Bradley Sharpe's wife, and found it very disheartening, I even felt sorry for him when he found out, though when I found out her age, I wasn't too surprised, even though at her age, I would think that she'd be a bit more responsible. I unfortunately wasn't a huge fan of the typewriter like font, it made the story appear coldly disconnected even though that wasn't the case at all. I ended up giving this book a four star rating and got a copy in exchange for an honest review.

Last Word:
Even though I'm not a fan of blood and gore, overall, I enjoyed this book. The end was quite a creepy climax.