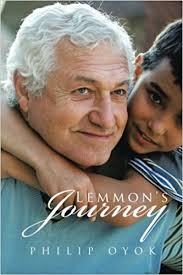 Blurb:
Lemmon Grandee is sad and bitter about life. He is fighting the retirement blues and mourning the sudden loss of his wife. Lonesome and heartbroken, his friend and neighbors fear the worse. Suicide seems like the perfect antidote for him.
Things change when while cleaning out his late wife’s studio, he uncovers hidden letters from his runaway daughter, Gloria, currently living a new life in New York City with her eight-year old son. Lemmon suddenly finds the spark of life he thought he had long lost. He gets on a bus headed to New York with the intention of rekindling his relationship with his daughter and see about convincing her to return home. Who knows? It just might bring an end to the nightmarish dreams plaguing him lately—dreams that foretell of a dark future awaiting him and his lost family.
A story of love and death, pain and loss, and the courage to find second chances in life.

About the Author:
PHILIP OYOK was born in Port Harcourt, Nigeria. He published his first book 'The Artist at Work and Other Short Stories' in 2010. He fell into a Great Depression and chose instead to pursue a different style of writing under the alter-ego Damien Dsoul. He recently found his mojo back and has resumed writing in his real name again.

My Take on the Book:
This was a book that I quite enjoyed - especially the steady pace. Aside from some grammatical errors, one thing that I found that was an anticlimax was the ending - I was expecting something more sinister to happen in the death scene; and the contents of the will wasn't really explained. I ended up giving this book a four star rating and got a copy in exchange for an honest review.

Last Word:
Another thing that I liked was how a certain scene built into a nice climax - it was very interesting to read. There was also the odd moment where this novel dragged just the tiniest little bit; other than that, I really enjoyed this book.