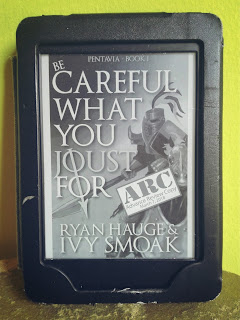 Blurb:
The fiercest knights in the realm are coming together to compete in the Joust for Arwin's Lance, a tournament that will divide even the closest alliances. The winner alone will have the power to start or prevent a war from unfolding across the peaceful lands of Pentavia.
House Hornbolt, a prominent family that desires peace above all else, is hosting the tournament. The Hornbolt’s have always been strict followers of tradition. The first born son wears the armor of a knight. The second takes the priestly Oath of Arwin. And the daughters get married off to the most eligible suitors.
The eldest son is the favorite to win the tournament. But the rest of the Hornbolts aren't as eager to follow the paths laid out for them. What if the second born wants to be a knight too? And what if the eldest daughter just gave her heart to a common thief?
Customs are meant to be broken. But that’s not all that threatens to shatter House Hornbolt, not when a secret deeper than the late king's grave is unearthed right before the joust.
The fate of Pentavia hangs in the balance as war becomes imminent. And the scales are about to tip.
One wrong move and everything could fall to pieces.

About the Author(s):
Ryan Hauge is the author of the highly anticipated Pentavia fantasy series. Drawing inspiration from his toy business and the countless computer games he grew up playing, he weaves tales of mystery and intrigue. When he’s not writing, you can bet that he’s distracting his wife from her work, handling a toy emergency, or whipping up something delicious in the kitchen. He lives in Wilmington, Delaware with his wife, Ivy Smoak. They do everything together, including writing the Pentavia Series.
Ivy Smoak is the Amazon bestselling author of The Hunted series. When she's not writing, you can find her binge watching too many TV shows, taking long walks, playing outside, and generally refusing to act like an adult. She lives with her husband in Delaware.

My Take on the Book:
I really enjoyed the annexure of the list of Houses at the end; and ended up loving the illustrations. This novel ended on a real cliffhanger - and I'm very curious to find out how the situation is going to be resolved. I ended up giving this book a four star review and got a copy in exchange for an honest review.

Last Word:
I thought that this was an intriguing idea for a fantasy novel - and though it might have had one or two ideas very loosely based off of other books - but then it branched out into it's own unique story.