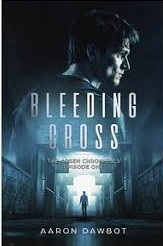 Blurb:
In the Still-Water Home of the Mercy an elderly resident is found brutally murdered.
Not only has he been killed in the most horrific manner, but his body has also been desecrated to represent the sign of the cross. All the evidence suggests that there is a paranormal element to the case and it’s one that only immortal investigator Thomas Arsen will be able to solve.
But, as he searches for the clues that will crack the case, Arsen soon discovers that there is much more to the crime than he first thought, with a terrible secret manifesting itself and threatening the existence of everything he holds dear.
And as the body count begins to increase, with more of the residents succumbing to an ancient evil, Arsen comes face to face with the demons that not only threaten the lives of the innocent, but also the ones which have lurked in his heart these past two hundred years.
Can he unravel the mystery before more innocent lives are lost? Or is it time up for Thomas Arsen and the rest of humanity?
Enjoy the first chapter of this supernatural detective series, as we follow the tribulation and challenges that continue to unfold before our Immortal hunter of killers.


Let me just say I'm your average Joe, I work hard for a living. Although I've been blessed to have an amazing profession as a cardiologist, I still feel that I could share much more with the world.


Born in Baghdad (A city pretty much famous with ancient stories and mythology).Since my early years in Southampton, UK, I have always felt a special knack for fantasy and adventure. Everyone who knew me always noticed how my gaze drifted to some unseen world. As the years flew by, I discovered that I wasn't alone in my madness after all. Hundreds of fiction books later, It came to me that I can contribute with fictions of my own. In this time and age, everyone with a fresh idea can easily share his/her vision, and even better, make a living from it as well.
To me nothing is better than to create a world where imaginary beings could live in, craft adventures that tease the imagination, expanding our common consciousness.

My Take on the Book:
I found this book to be really well written; even though it was a novella. It was to the point, but clear - there was no confusion as to what was happening. Though you don't get a precise idea of who the characters are, you aren't left floundering either - there's enough information throughout the book to give you a general overall idea of the characters. In the beginning, I wondered whether Thomas Arsen and his crew were the good guys...or the bad guys? There were one or two twists that I didn't quite see coming.

Last Word:
Another thing I will say - I found Thomas quite intriguing...so I will definitely be reading the next book in this series, for the reason mentioned above, as well as for the story-line and for the writing.