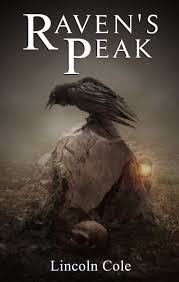 Blurb:
A quiet little mountain town is hiding a big problem. When the townsfolk of Raven's Peak start acting crazy, Abigail Dressler is called upon to discover the root of the evil affecting people. She uncovers a demonic threat unlike any she's ever faced and finds herself in a fight just to stay alive.
Abigail rescues Haatim Arison from a terrifying fate and discovers that he has a family legacy in the supernatural that he knows nothing about. Now she's forced to protect him, which is easy, but also to trust him if she wants to save the townsfolk of Raven's Peak. Trust, however, is something hard to have for someone who grew up living on the knife's edge of danger.
Can they discover the cause of the town's insanity and put a stop to it before it is too late?

About the Author:
Lincoln Cole was born and lives in Columbus, Ohio. He is twenty-nine years old and has been writing novels his entire life. He works in the IT industry developing web applications and writing software.
He is married, has a pugamonster named Luther, and enjoys writing in his spare time. Writing and telling stories keeps him sane.
He was inspired to start writing by the works of George R.R. Martin, Isaac Asimov, and Stephen King. He is currently working on several titles, including the follow up to Graveyard of Empires as well as three new series.
Growing up, he worked in the horse racing industry with his grandparents for many years and won an award writing a short story for Hoof Beats magazine while in High School. He had since won the Visionary/Inspirational YA award from Literary Classics in 2015.

My Take on the Book:
I got the idea that Abigail was trending dangerous waters with the bargain that she was pulling. I also wonder if there's an actual town called 'Raven's Peak', or if that was just a fictitious town? I thoroughly enjoyed this book, giving it a 5 star rating, and got a copy in exchange for an honest review.

Last Word:
Since this ended on a cliffhanger, I most certainly can't wait to read the next book. As always, I enjoy reading Lincoln Cole's books, and this one was no different! I even got my dad to get me a paperback copy while he's in the USA.