Review - Shadow of the Raven by Millie Thom 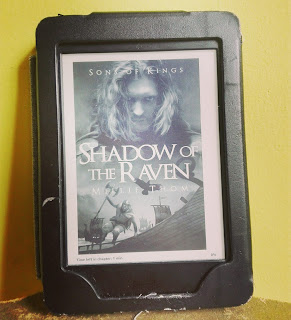 Blurb:
By the mid ninth century, Danish raids on Anglo-Saxon kingdoms have escalated. Several bands even dare to overwinter on the coastal islands, particularly those at the mouth of the Thames, where the kingdoms of Wessex and Mercia border each other.
The kings of these lands must put past enmity- aside and take the first steps towards unity; steps they see as vital in the face of this newfound threat to their lands . . .
Alfred of Wessex and Eadwulf of Mercia are the sons of kings, whose futures have been determined since birth. But the turbulent events in their childhood years change the natural progression of things – and shape the characters of the men they will become.
Their roads to manhood follow vastly different routes, but both learn crucial lessons along the way: lessons that will serve them well in future years.
Discovering that the enemy is not always a stranger is a harsh lesson indeed; the realisation that a trusted kinsman can turn traitor is the harshest lesson of all.
The story takes us from the kingdoms of Mercia and Wessex to the Norse lands stretching north from Denmark to the Arctic Circle and east to the Baltic Sea. We glimpse the Court of Charles the Bald of West Francia and journey to the holy city of Rome.
And through it all, the two boys move ever closer to their destinies.

About the Author:
Millie Thom is a former geography and history teacher with a degree in geology and a particular passion for the Anglo-Saxon and Viking period. Originally from Lancashire she is a mother of six grown up children and now lives with her husband in a small village in Nottinghamshire, midway between the town of Newark and the lovely old city of Lincoln. When not writing, Millie enjoys long walks and is a serious fossil hunter. She is also an avid traveller, swimmer and baker of cakes!

My Take on the Book:
This was quite a fascinating book; I liked Aethelwulf's family and crew, it appeared as if the king managed them quite nicely; though I didn't always agree with the decisions that he made. The match between Hastein and Freydis was a decent one. I ended up giving this book a four star rating and got a copy in exchange for an honest review.

Last Word:
This is the first book that I've read by Millie Thom; and it ended up pulling me right in! It will be a series that I'll definitely be continuing.