Review - The Revolution on Marina M by Janet Fitch 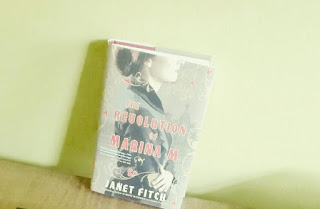 Blurb:
St. Petersburg, New Year's Eve, 1916. Marina Makarova is a young woman of privilege who aches to break free of the constraints of her genteel life, a life about to be violently upended by the vast forces of history. Swept up on these tides, Marina will join the marches for workers' rights, fall in love with a radical young poet, and betray everything she holds dear, before being betrayed in turn.
As her country goes through almost unimaginable upheaval, Marina's own coming-of-age unfolds, marked by deep passion and devastating loss, and the private heroism of an ordinary woman living through extraordinary times. This is the epic, mesmerizing story of one indomitable woman's journey through some of the most dramatic events of the last century.

About the Author:
Janet Fitch was born and raised in Los Angeles, a third generation Angelino.
She attended Reed College in Portland Oregon, graduating with a degree in history, and attributes much of her storytelling ability to her training as an historian. Since then, she has worked as a proofreader, typesetter, graphic artist, newspaper editor, magazine editor, freelance journalist and teacher of creative writing--not to mention Manpower Temp and worst waitress in Los Angeles. If she spilled coffee on you, she apologizes.
Her second novel, Paint It Black, has just appeared in paperback and in Dutch, Italian, Swedish, German, Hebrew and Polish. Jennifer Jason Leigh performs the audiobook. Fitch's first novel, White Oleander was an Oprah Book Club selection, and was translated into 24 languages, including Mandarin, Turkish and Finnish. It served as the basis of a motion picture starring Michelle Pfeiffer, and the audiobook is read by Oprah Winfrey. Her early young adult novel, Kicks, sometimes surfaces. The anthology Los Angeles Noir (Akashic Noir) and Black Clock 7 both carry recent short stories.
Fitch currently teaches fiction writing at the University of Southern California Master of Professional Writing program. She regularly participates in the Squaw Valley Community of Writers summer workshops, and will be teaching at the 2008 Virgina Colony for the Arts' summer program in France. She lives in Los Angeles, in the hills where Rena Grushenka's girls picked trash in White Oleander.

My Take on the Book:
Sometimes the politics went a little bit over my head; some of the Russian names also left me wondering how to pronounce them, but I nevertheless thoroughly enjoyed this book. There were moments when the novel came off a little bit literary, but it was primarily historical fiction with political elements. I found Marina Makarova's parents a little bit too distant with how other people were suffering, and found it amazing how some of the elite were still snotty despite their dire circumstances that they find themselves in when things weren't exclusively theirs anymore. It's absolutely amazing the social hierarchy difference between Marina and Varvara; who seems to be quite observant and has experience on what life is about outside of the privilege that Marina has. I ended up giving this leisurely book a five star rating.

Last Word:
It's the first novel that I've read by this author; and I really enjoyed it. I also have 'Paint it Black' on my kindle, and having finished this book; it's going to be interesting reading that one. I ended up getting this book in January's The Secret Book Box which is a South African bookish box that I will be talking more about in March.