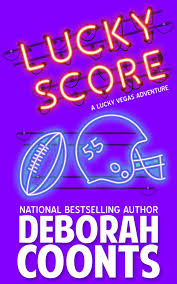 Blurb:
If Lucky O’Toole, chief problem solver for the Babylon, Vegas’ primo Strip property, knows one thing—where money goes, trouble follows.
So, when the NFL announces it’s moving a team to Vegas, Lucky is left on the fence until the trouble she feared lands in her lap.
Nolan Ponder, one of the key players in the negotiations to get the NFL to Sin City, staggers into the Babylon covered in blood and holding a knife.
With the mountains of money and careers on the line, Lucky figured someone would try to kill the deal.
But murder?
Chasing down a murderer is the last thing she needs.
Teddie, her former live-in lover is exploiting every angle to get back into her heart.

Jean-Charles, her fiancé, is planning a trip to France to introduce Lucky to his family.

Mona, her mother, still hasn’t named her twins.
Lucky’s life is quickly becoming a game of murder and mayhem.
She just hopes this game won’t go into overtime.

About the Author:
Deborah Coonts swears she was switched at birth. Coming from a family of homebodies, Deborah is the odd women out, happiest with a passport, a high-limit credit card, her computer, and changing scenery outside her window. Goaded by an insatiable curiosity, she flies airplanes, rides motorcycles, travels the world, and pretends to be more of a badass than she probably is. Deborah is the author of the Lucky O’Toole Vegas Adventure series, a romantic mystery romp through Sin City. Wanna Get Lucky?, the first in the series, was a New York Times Notable Crime Novel and a double RITA™ Award Finalist. She has also penned a few standalone novels; After Me, a medical thriller, Deep Water, a romantic suspense, and Crushed, a contemporary romance set in Napa. Although rarely there, Deborah calls Houston home.

My Take on the Book:
This book gets a solid five stars from me! There ended up being quite a few characters that had things to hide in this novel; and I ended up enjoying the story-line of this particular book in the series. I got an ARC in exchange for an honest review.

Last Word:
I most certainly hope that another book in the Lucky O'Toole series will be coming out soon - this is the second book that I've read and I've come to adore Lucky will her quirks; as well as her not-so-great traits!