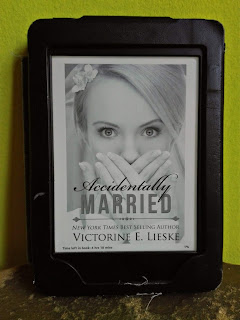 Blurb:
Madison Nichols, aspiring actress, is floundering. Her rent is due and she needs a job. Desperately. After getting a tip about an open position, she rushes to Jameson Technologies and meets CEO Jared Jameson. Unfortunately, due to a misunderstanding, she is put in the awkward position of pretending to be his girlfriend. Not the job she was applying for. And when she finds out Jared lied to her to get what he wanted, she decides to get back at him. In front of his family.
Jared is stunned when Madison announces they are getting married. She pushed her revenge too far. How can he tell them it’s all a lie? And when his sick aunt asks them to be married before she dies, Madison comes up with a hair-brained plan to hire an actor and stage a fake wedding.
What they both don’t know is Jared’s father has found out about the fake wedding. And he’s got his own hair-brained plan.
This is a sweet romance, appropriate for any age.

About the Author:
Victorine enjoys commercial success through her writing, thanks in part to her ability to analyze and adapt to the constantly changing trends in today's publishing environment. She self-published her first book, Not What She Seems, in April of 2010. In March of 2011, Not What She Seems began its 6 week run on The New York Times best selling eBook list. By May 2011 she had sold over 100,000 copies. Victorine's first romantic comedy novel hit the USA Today Best selling books list in January 2015.
Victorine has also helped countless other authors through her involvement and outreach as immediate past president of the Nebraska Writers Guild. She is active in many writing groups and forums and has given dozens of interviews for TV, radio and print media and has been a panel member and keynote speaker at several major events, including The Business of Writing International Summit. Her candor as a blogger and guest has made her a favorite with audiences worldwide. Victorine also served as a judge for the 2015 Whitney Awards. Because of her selfless service to fellow authors through assistance with critiquing, beta reading and graphic design, she was chosen as the inaugural recipient of the CIR Strong Award, named for late Clean Indie Reads forum member Jessica Strong.
Victorine and her husband have raised their four children in Nebraska. Victorine also does graphic design work in the publishing industry.
Victorine's book, How to Find Success Selling eBooks, details how she found success, and gives advice to other writers wanting to sell eBooks in the genre fiction market.

My Take on the Book:
This novel ended up taking me by surprise - there was a particular character that I related to. I gave this awesome leisure read a five star rating.

Last Word:
One thing I will say is that this is definitely not going to be the last book I read from this particular author.