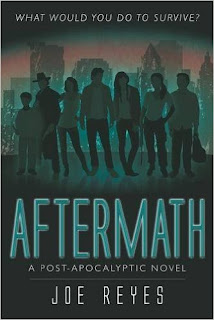 Blurb:
Aftermath is a growing series about war, love, brutality and most of all, survival. What was once the United States has become a savage post-apocalyptic environment where the worst of the worst prosper and the remaining good hide. The series features a brutal setting, where seven characters in different parts of the United States must adapt to this new environment. The "fight or flight" mentality plays into the story, as the nation is divided into factions fighting for control of the country. The government is outnumbered, outgunned, and forced into hiding as well to recoup their forces. The novel follows a fast paced momentum from the first page to the last word. The plot pits these characters against the elements and each other, with plot-lines intertwining on opposite sides of the war effort. And one character's quest for revenge can jeopardize not only the war outcome, but the reshaping of the entire nation. With an ever-changing storyline and evolving characters, the Aftermath series gets more intense with every chapter. But what these characters don't realize, the terrifying evil making its way across the ocean.

About the Author:
I was never one for clichés, so I don’t want to start this off with “as long as I can remember, I’ve wanted to be a writer”. I was never a big reader because I found a lot of novels boring. Unless a book was mandatory for school, or became a TV show or movie, then I had very little reason to pick them up. Even the big authors, like Stephen King and John Grisham, I’ve never found interesting.
I lose interest quickly in a book. No, I don’t need constant action to keep me flipping pages, but I must be entertained. Long drawn out descriptions and dialogue kill my engrossment. I don’t need a room described to me down to the dust clumps under the couch.
I get plot ideas easily. Almost to a fault because I can’t work on all my ideas at once. The challenge is sitting down and committing to seeing one story through, rather than having a ton of half-finished ideas.
My style of writing is the kind that catches my attention. I feel my stories are very fast paced. It reads like you’re watching a TV show, especially if it’s a story with multiple characters. I describe the setting and characters, but I don’t like to take a long time doing it.
When I create a character, I put myself in their shoes. I picture as that character in the same situation with all the backstory, and write what I would do if I were them. Even when I have the characters do terrible things. I think what I would do in the same situation with that mindset.
Honestly, I don’t really enjoy writing stories about violence and killing, but I do it because I feel I come up with creative plotlines. I think I’m better at darker storylines than happy ones. I once had to write a rape scene and it took me two days to begin writing because I tried to find a way around it, but it was the only scene that made sense.
The characters aren’t just words on a page, they are extensions of me. They are real to me, and I am in control of their failures and successes. Sometimes it’s nice to see some have happy endings. However the problem is I like to take a real life approach to my stories, and not everyone gets that storybook ending.
I want to be able to do more with my writing than just sit at a desk all day and type. Yes, it would be ideal to have more money than I know what to do with, but I would like to do more than just that. I would like to start charities and give back to people; give a large portion of a books profits to disease research. I would also like to start writing communities and give unknown writers the chance to showcase their work.
But I can’t look that far in the future now. I know right now I must focus on my own dreams before I can help others fulfill theirs or give back to the community. I do hope you enjoy what I write and hope I can produce more pieces that catch your interest.

My Take On the Book:
I didn't think that I'd have much to say about this book...but I do have some things to say. I like how there's flashbacks in between the main story. Everyone has different agendas. I ended up giving this book a four star rating. I got a copy in exchange for an honest review.

Last Word:
It's the first time I've read a book from this author, and I'd be interested to find out if there's going to be a sequel to this book.