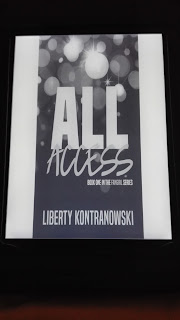 Blurb:
Every fangirl has a fantasy . . . what happens when that “if only” dream comes true?
Though she’s a single mom wedged firmly into thirty-something territory, author Kallie Reagan’s devotion to rock star Niles Russell knows no bounds. To pay homage to her muse, Kallie writes a smokin’ hot novel featuring a hero who looks and acts an awful lot like Niles — and a heroine who may or may not have a smattering of herself thrown in for fun.
When Niles learns about the book and surprise-texts Kallie, the two deliciously complicated creatives become fast friends . . . and so much more. But trying to define a relationship that’s laced with closeted skeletons, half-truths, and constant question marks proves harder than making it big. If they’re going to progress from Fangirl Infatuation to The Real Deal, these two need to give each other All Access to the most important place of all: their hearts.

About the Author:
Liberty Kontranowski is a romantic women's fiction author who adores all things lovey-dovey with a pinch (or more) of hubba-hubba. When she's not at the keyboard, she's taxiing around her three boys, knocking back craft beers with the hubs, blogging, fangirling, and dreaming up more fake people. She also spends an inordinate amount of time drinking coffee and dreaming of the day she can bid adieu to far-too-wintry Michigan and move to a place where she can write with her toes in the sand.

First Stages of Love:
As I read this book, I found that Kallie Reagan was at times head-in-the-clouds in love with Niles Russell; with Niles eventually ending up the same way. They did have their issues, but very few of them were picked up by Kallie herself, they were usually pointed out to her by someone else. First stages of Love happens in real life and always happens at the beginning of the relationship, but then, at the end of the day (read: a couple of years down the line), that disappears, which then throws the relationship into the danger zone of falling apart, depending on what the couple is focusing their energies on; this part of the novel was such a classic and realistic take on what can be a huge stumbling block in relationships.  Another thing I just thought of, with Kallie having just come out of a broken marriage, surely she should have been more cautious when getting to know Niles, or was it her way of escaping reality?

The knowledge the fans have of the band itself also seems slightly too much at times, which brings me to my next point...

The Reason Why People (Especially Celebrities, though not all) have Boundaries...
The details that are described in this book by Kallie (before she met Niles), some of it a person would think that the band would keep private. It's not explicit or bad details, but not every detail of the band should be made public for the fans to have access to. Maybe this point irked me a little bit because I wouldn't want my private life on a platter ready to be handed out to fans; I'd want people (even fans) to respect my privacy (and not just home life and family), but even some band-related things. I know that some people would argue and say that celebs put themselves out there to have their lives microscoped, but even they deserve privacy, and not the definition of privacy set by the media and general public; which is nearly next-to-nothing.

Now on to other things I found interesting to read about in this novel:
A person would expect the rest of Niles' band to be nonchalant towards Kallie; so it comes as a surprise that they're interested in meeting her.
Another thing that freaked me out a little bit was the details/scenes that Kallie wrote about in her book.

Nonetheless, I enjoyed this book, giving it a four star rating. I got a copy in exchange for an honest review.

Last Word:
Sorry if it was a bit of a long read. Make no mistake, I love my bands, but I definitely don't know details about any of them, besides for some VERY basic band-related details. And even when I was 'obsessed' in my teenage years, I don't think I was ever as bad as some fans that I hear about in today's world.