Showing posts from September, 2016
Show All

As I said in my previous review, I've been having a bit of a lag in reading; which is why I missed last week's 'Week of Reading', since I wouldn't have had any review to put up. The book that I've just finished reading, 'Seven Will Out' by JoAnn Spears, I've been reading this book for two weeks, so I'm a little bit behind on my reading; but here is the reviews:
Seven Will Out by JoAnn Spears: Amazon: Amazon Review - Seven Will Out Goodreads: Goodreads Review - Seven Will Out Here is my blog review of the book: Blog Review - Seven Will Out
The next book that I'm going to be reading is 'The Finn: Revenge Will Surface' by Matt Danza with Adam Horeth. I've read the first book in this series, and the one I'm going to be reading now is the second one, so I'm curious to find out what I think of it.
Last Word: Since it's nearly the end of the month, I'm probably not going to finish all the books that I wanted to …
Post a comment
Read more 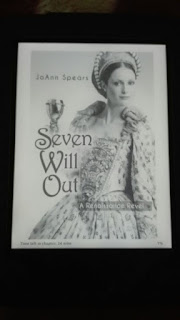 My Copy of the Book
Year Published: 2015 Genre: Chick Lit/Historical Fiction/Humor
Blurb: Tudorphile Dolly thought that the night she spent on an astral plane with Henry VIII's six wives, learning their heretofore unknown secrets, was a one-time thing. Not so! In "Seven Will Out", Dolly finds herself back in the ether with the women of later Tudor times: Elizabeth I, 'Bloody' Mary, Bess of Hardwick, Mary, Queen of Scots, and Anne Hathaway Shakespeare, to name a few. They too have secrets that will turn history on its head, and comic sass that will keep you laughing. And if that isn't enough, there is even a cameo appearance by Anne Boleyn. You've read all of the traditional, serious and romantic takes on the legendary characters of the English Renaissance. Why not try your Tudors and your Shakespeare with a new and different twist?
About the Author: JoAnn Spears couldn't decide whether to major in English or History in college. Life stepped in, and she woun…
Post a comment
Read more 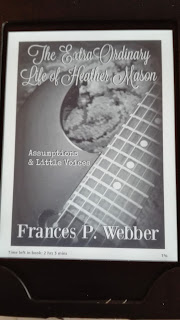 My Copy of the Book
Year Published: 2016 Genre: Romance
Blurb: After having her heart shattered by her former fiancé, Justin Griffin, Heather Mason thought she had found someone safe and grounded in Mitchell Kent. By the time she realized she was wrong, she was so far in to their marriage that it would be difficult to extricate herself without losing custody of their infant son. Heather has learned that Mitchell’s jealousy no knows bounds when it comes to Justin, who just happens to be a world-renowned rock star. A shrewd and well-known lawyer who plays at life like a game of chess, Mitchell has moved the family to London, thousands of miles away from the man Heather gave her heart to over ten years ago. Heather and Justin have come to accept that they are still just as perfect for one another as ever, and their incredibly deep and ethereal bond remains intact. An illicit kiss they shared just days before her departure to London started the ball rolling toward the fate they knew they were…
Post a comment
Read more

Highlights of the Month - August 2016

By Carmen September 03, 2016
Hello Everyone,
My post this month is a little late - but it's here! I think my highlight for the month of August would be reading a paperback, and I'm hoping to read one in September as well...but we'll see how the reading schedule goes.
My reviews were also more spaced in August as well, one thing I found was that I read what I was feeling. Have you ever had/done that? The books that I did that with was 'The Partner' by John Grisham and 'The ExtraOrdinary Life of Heather Mason' by Frances P. Webber.
One strange but interesting book that I read was 'Safe Harbor' by Heather Wardell. I also managed to get some awesome books in August as well, among them a gorgeous 'Game of Thrones' box set.
Last Word: So the month of August was a decent one - and I've got my review schedule all planned out for September. As I said, hopefully I'll get another paperback in. If there's anyone that would like to connect with me on social media, let me know i…
Post a comment
Read more 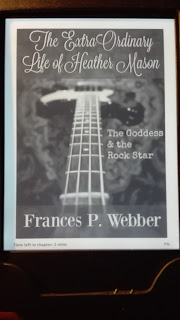 My Copy of the Book
Year published: 2016 Genre: Romance, also has slight new adult vibes as well
Blurb: Heather Mason sees herself as a socially inept, plain Jane, teenaged guitar nerd. Her uncanny guitar abilities and the bizarre recurring dream of a Native American woman’s adventure can’t convince her otherwise. However, everything changes the day Justin Griffin walks into her life and her heart. Once their musical and personal collaborations begin, doors open that once seemed foreign and out of reach, and Heather blossoms into a beautiful, confident, full-fledged rock star. With Justin by her side, her life is idyllic. Together they make a lightning-fast trip to the highest echelon of rock music and become the most recognized and respected couple in the business. Together they reap all the rewards of such a feat, and handle it with the utmost grace and gratitude, and never, ever take it for granted. Ironically, the one thing that falls by the wayside is the thing that started it all: t…
Post a comment
Read more
More posts 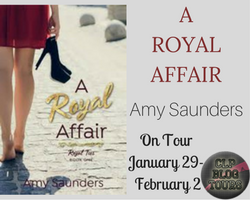 About the Book:
As crown princess of Lorencia, Desi can handle other royals, dignitaries, and celebrities without batting an eyelash. But Astin Gold, the suave heir to a hotel empire? No amount of diplomatic training prepared her for him. Or the whirlwind media scandal she’s about to ignite with him. Rumors swirl, and the pressure is on to deflect the attention. But Desi’s feelings for Astin only blossom, despite allegations that he’s using her for his own gain. As she dares to date him under the radar, it becomes clear someone close to her is behind the scandal. And their secret won’t stay secret forever. As tensions rise, Desi must decide if Astin deserves her trust. And, more important, her heart.
About the Author: Amy is a sci-fi/mystery addict with a soft spot for humor and romance. She lives in Massachusetts, and loves to bake and watch movies. 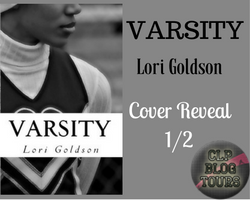